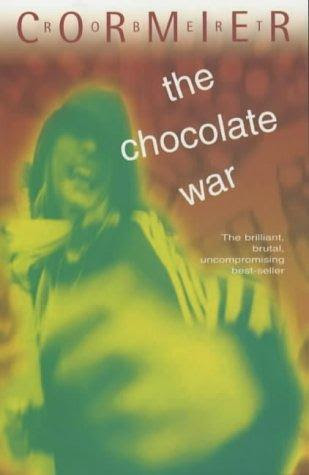 Quick Recommendation for a good novel.

The Chocolate War by Robert Cormier.

I found a replacement copy of this yesterday for $2 at a Salvation army store. (My original copy has fallen apart from overuse)

This is one book that I would be pleased to see my kids read (later on, no way are they reading it now). In fact, I was always glad to see kids reading Cormier's books, and The Chocolate War and I Am The Cheese in particular. Maybe it's because I can't stand books being removed or censored from school libraries, and seeing kids read them is a great stand for their right to choose. (which incidently, is the sub-theme of The Chocolate War). If you haven't read it, I urge you to.

Also check out Cormier's other books, especially I Am The Cheese and Beyond The Chocolate War.

Really. Because they were not "literacy-based" a little girl's knitting group are now not allowed to meet in an Ontario library.

I applaud the little girl and her mother for standing up to this. This is just not right. Libraries are not just Literacy spaces, they are SOCIAL spaces.

We raided the discard pile at our local library last week and found this gem.

Anno's Mysterious Multiplying Jar.
For those who haven't seen it, it is a great story for young children about a jar, that holds a sea, that holds and island that contains kingdoms, made up of villages, which contain houses, which have rooms that have cupbourds, and in the cupboards are boxws which contain..... jars! (It's very similar to the "As I Was Going To St Ives" riddle)
My five year old loves the "magic jar" aspect, and my seven year old is just learning multiplication, so she is getting into the "how many jars are there at the end" part of the book.
The second half of the book is a description of the mathematical process of factorials, showing exactly how to calculate how many jars are in the boxes at the end of the story. It turns out to be over three million.
I think the book is damn cool, and the cover is a great painting.

Red Letter Day for he Librarydude today. we went to my local public library (where I don't work, but trying to get into) to sign up my 10 week old daughter for a library card.

We didn't end up borrowing a book, but we did buy a Paddington Bear book off the discard table for her.

I loved Paddington when I was a boy, still do actually, so LibraryDaddyDude is going to enjoy it too.

Competition For Google?
Recently, well as recently as I can catch up, so maybe within the last year, a new search engine has cropped up.

I've just started poking around on it, and tried out a search for "jerichospin". (For those unaware, Jerichospin is the username I use on Livejournal.)

The first page lists nine results. The first one is about "resistant depression", one is in Russian, and four are not relevant to me. I will give this a trial run, but first impressions don't look good.

Anyone use it? What do you think?

It dawned on me today that I have four blogs. (plus one livejournal)

Why do I need four blogs? Or, more to the point, why do I continue updating the ones that are not read? Like, surprise, surprise. this one!

I suppose I just kept this going after learning the basics of blogging on Blogger all those years ago. (http://y2dave.blogspot.com is the start of my online ramblings). But why do i not update? Well, the truth is, I actually do, but not on a "blog" per se, but on my Livejournal.

Now I know some of you will decry Livejournal, saying it's not good for blogs, its only about chatting with your mates, etc. well, yeah! That's the point. Livejournal is a social meeting point, Blogger, at least to me, is a cyber-soapbox.

Livejournal feels more social. The communities aspect of it is great, and the ease of looking at all your "friends" posts is an asset.

Of course, having said that, once I learn how to do funky and interesting things with Blogger, I'll probably come running back here. :)

Not making too much sense tonight. Having a drinky or two. See you next time when my mind will be full of Theory X and Y and Z (as I'm reading for my management of libraries unit at uni)

Libraries and Other Organisations